Mas fiesta for your money - Guaranteed 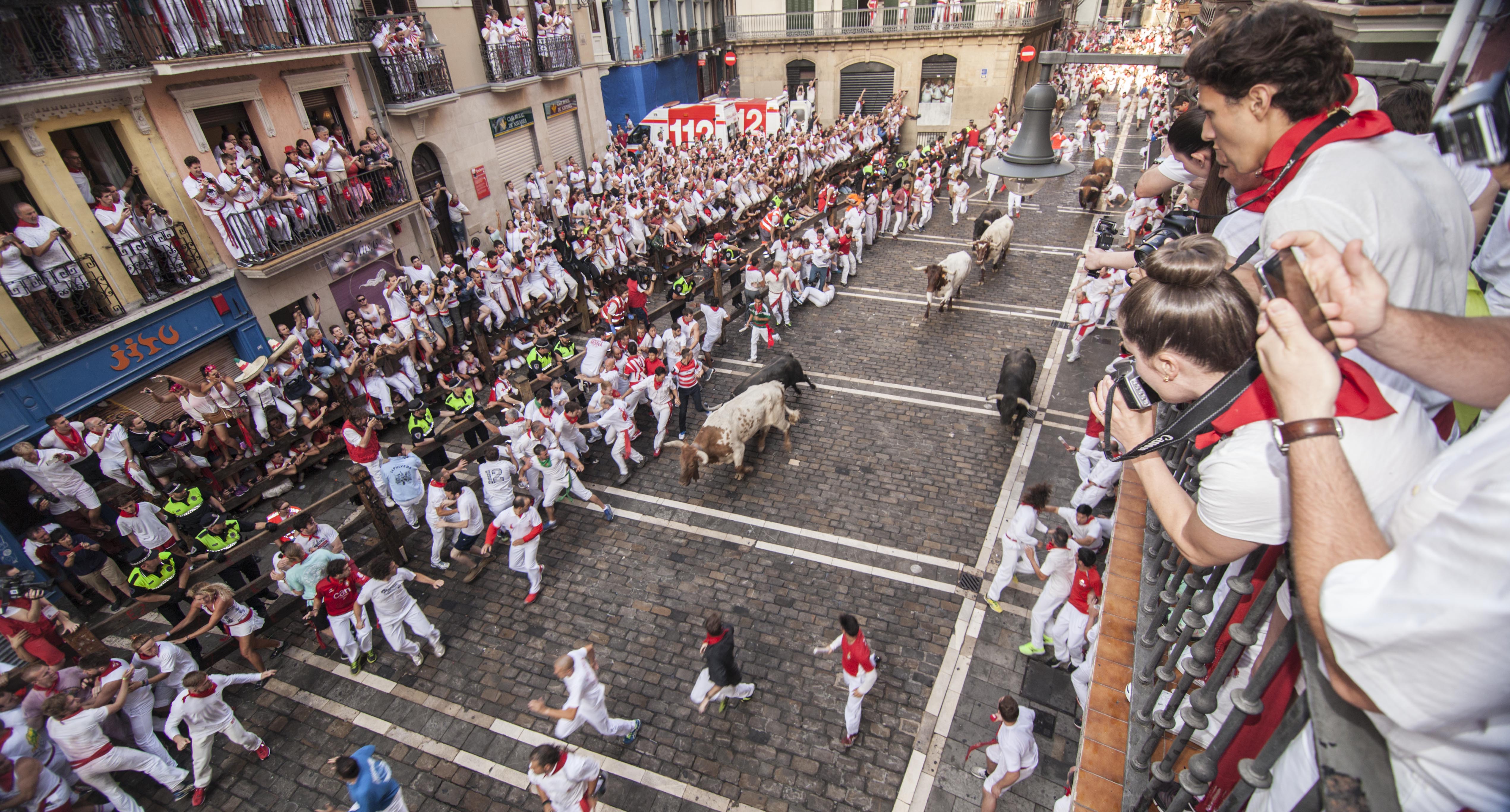 Equal parts cultural tradition and lively extravaganza, the San Fermin Festival has been going on for centuries. The fiesta is best known for the Running of the Bulls, the adrenaline-pumping event where massive steers chase runners through the streets of Pamplona. This results in a harrowing event that culminates when the bulls make their way through a narrow gateway into the Plaza de Toros, the famed bullfighting ring finished in 1922.

Though the Pamplona bull run is easily our favorite part of the fiesta, these mad morning dashes through the streets are only a small part. Attendees will find the lively Txupinazo Opening Ceremony on the first day, followed by event-after-event for the remainder of the celebration. Music fills the streets of Old Town Pamplona, as smells of delicious Spanish cuisine waft through the air and sangria seems to be flowing around every corner. There’s something going on nearly every minute of every day, so be sure to take a look at the 2023 San Fermin dates and schedule to ensure you catch all the activities you’d like to take part in.

More Than a Fiesta

San Fermin may be the world’s largest fiesta, but for many it is also a celebration that honors Saint Fermin, a prominent local religious figure that was famously martyred by bull in the early 300s. His legacy lives on as the history of the San Fermin festival, where many honor his work and passion. Marks of Saint Fermin can be found throughout the fiesta, from the colors of the clothing attendees wear to the bull run – a symbol of Fermin’s own death. It is said that, to receive Saint Fermin’s blessing during the festival, you must wear all white, while your red bandana and sash (tied over your left hip) represent the blood of the saint. For those seeking to learn more about the religious figure for whom the San Fermin Fiesta is all about, we offer Pamplona tour packages that include little tidbits of information about the festival’s origin throughout.

It all begins in front of town hall, where the mayor and a firework launch commemorate the festival’s start. Crowds fill the mayoral plaza and sangria flies through the area as this exciting event, known as the Txupinazo Opening Ceremonies, takes place. Afterward, crowds disperse to take part in all manner of exciting festivities and entertainment for the remainder of the day.

Each new day of the fiesta brings its own unique adventures. In the mornings, visitors head to their running of the bulls balcony spots or – for the boldest – to the route’s entrance to run. In the old town located just a block from the bull run route, the Plaza del Castillo is the central attraction for much of the fiesta. Here, you'll find live music, DJs, artists, and all manner of shops and stands. You’ll also find the famed Cafe Iruna, a favorite among Ernest Hemingway enthusiasts for its feature in his novel, The Sun Also Rises.

Around the City Center, the Giants and Big Heads (in Spanish, the Gigantes y Cabezudos) walk the streets in a leisurely parade each morning of the San Fermin Festival, shortly after the bull run. The group is made up of four pairs of Kings and Queens that represent the four corners of the world – Africa, America, Asia, and Europe – and an entourage of protectors.

As the day progresses, various acts – from Spanish folk music and Navarran songs to local sports – occur around City Center. The evenings deliver the final big event of the day when matadors face off against the bulls from the morning’s run. While controversial for some, this cultural tradition has taken place in Spain since the 8th century. It’s an important part of the country’s past that showcases the respect between man and beast. Our packages include tickets to at least one San Fermin bullfight, where you’ll have the chance to see the intense spectacle.

Shortly after the bull run, you’ll find restaurants, bars, and nightclubs begin to fill across the city, as everyone celebrates the day. Once again, the city’s streets fill as many head to dinner or sample Pamplona’s specialty drinks – wine, sorbete, and craft gin tonics. That evening, a marionette show is put on in the Old Town, where families with children gather to watch.

On the final day of the fiesta, the Pobre De Mi (Poor Me) Closing Ceremonies take place. These see locals and visitors alike remove their red bandanas and sing, as they say goodbye to that year’s San Fermin fiesta.

The Opening Ceremonies are easily the most packed and sought after, for the massive celebration and first bull runs, but the subsequent packages are just as great. Mid-Fiesta packages generally give you the most time and space to enjoy the festivities, when the crowds begin to subside and the wildest bulls are sent down the route. The Closing Ceremonies are an experience unto themselves, as the fiesta fine-tunes its events and then says goodbye to the celebration.

Each experience is different from the other, but all are incredible and worthy of experience in their own right. Be sure to take a look at our Pamplona travel packages for more information, or reach out to our team with any questions you have when planning your trip to the world’s largest fiesta, San Fermin.